As preparations get underway for this month’s epic Unknown Fields expedition across the US Southwest, here are a couple of vintage photographs of myself in 1995. The UFO sightings at Yosemite National Park that open Mirage Men occurred a few days after these photographs were taken. 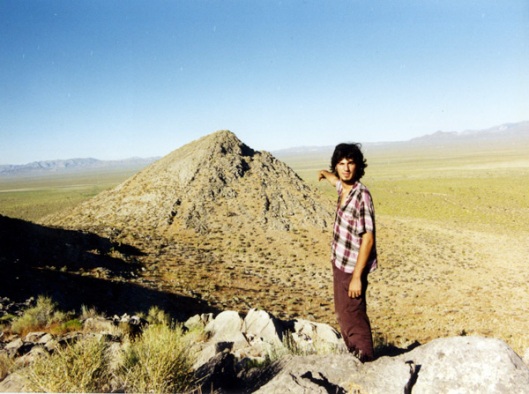 – pointing the way towards Area 51, or at least what I thought was the way… 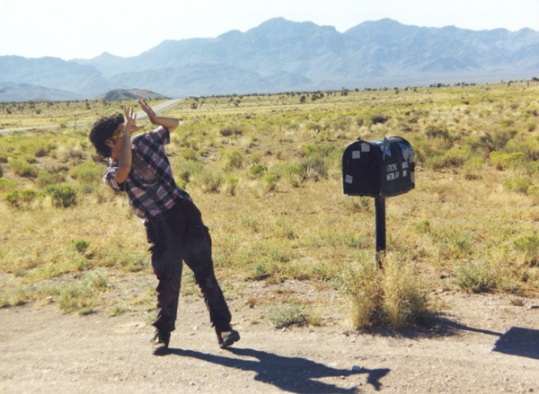 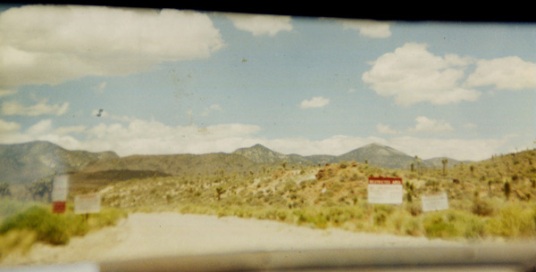 – a fuzzy view out of the car window at the warning signs at the base entrance (I didn’t dare take one outside the vehicle for fear of encountering the advertised “lethal force”).

A music video by The Castle, inspired by Mirage Men

Posted on May 10, 2012 by Mark
[click through to vimeo or it’s on youtube if you have a preference]

Here’s the first trailer for the Mirage Men film, created by mine and John Lundberg’s new partners on the project, Roland Denning and Kypros Kyprianou. Huge thanks to both of them for their amazing work.

The music extracts are by Earth (‘Mirage’ from Hex or Printing in the Infernal Method) and Cyclobe (‘You’re not alone, you’re dreaming’ from Luminous Darkness), and are used with permission.

The film is well on its way to completion now, and we’ll have more news, clips and information about preview screenings over the coming months.

Behold, the real Men in Black

This footage, and its lively voice over, is what I believe to be the first appearance of the Men in Black (MIBs) on camera. The MIBs of course are the sinister, omniscient silencers who show up to question UFO witnesses and intimidate them into keeping quiet about their sighting, made famous by Tommy Lee Jones and Will Smith in the big budget film series. [For the record, John Lundberg has just told me that a third MIB film is due this year, so it’s possible that this footage is viral advertising for that.]

I didn’t get a chance to talk too much about MIBs in Mirage Men, though they’re one of the more entertaining ephemeral elements of the UFO lore and a great example of a smart prank that went viral. They’re a demonisation of the real military interviewers (themselves, I suspect, occasionally members of the intelligence community disguised as Air Force or Navy employees) who would sometimes show up to ask UFO witnesses about what they had seen, and indeed advise them to keep silent about it, especially if the interviewee was already in the military.

From its origins  in Gray Barker’s 1950s flying saucer books like They Knew Too Much about Flying Saucers, the MIB lore was developed by his friends and co-authors John Mothman Prophecies Keel and Jim Saucer Smear Moseley, who enjoyed pranking each other as much as they did other UFO enthusiasts. [Note that Tommy Lee Jones and Will Smith are named ‘J’ and ‘K’ in the MIB films, for John Keel].

For those who aren’t familiar with the MIBs origins in Gray Barker’s imagination, here’s a good, personal overview of the story: Gray Barker: My Friend, the Myth-Maker. 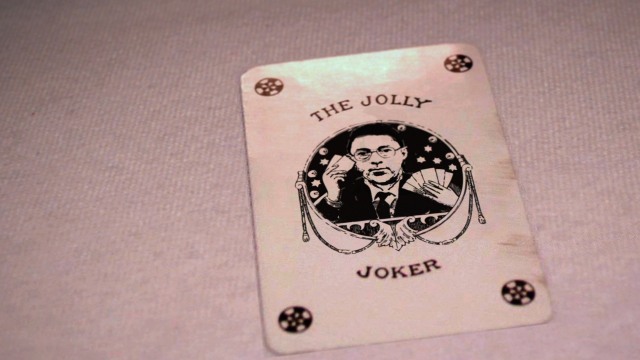 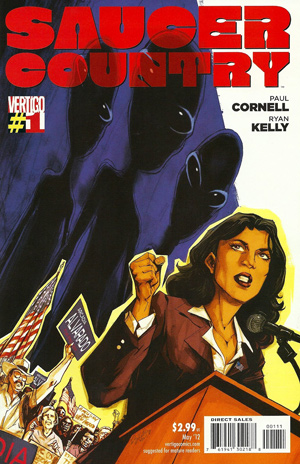 Saucer Country is a new comic book series written by Paul Cornell, drawn by Ryan Kelly and published by Vertigo.

Arcadia Alvarado, the leading Democratic candidate for President of the United States, says she was “abducted by aliens.”As the Mexican-American Governor of New Mexico, she’s dealing with immigration, budget cuts and an alcoholic ex. She’s about to toss her hat into the ring as a candidate for President in the most volatile political climate ever. But then…a lonely road and a nightmarish encounter have left her with terrible, half-glimpsed memories… SAUCER COUNTRY is a dark thriller that blends UFO lore and alien abduction with political intrigue, all set in the hauntingly beautiful Southwest.

The first issue has already been getting rave reviews in the comic press and the series looks set to be a sophisticated and enjoyable take on the UFO mythology. With so much rich material to play with, this could really be a fun, wild ride. Writes Cornell:

To know a country, know its mythology.  And this is the only modern American mythology.

I’ve also been thrilled to spot this on Paul’s blog:

I should also take this opportunity to once again thank Mark Pilkington, whose fantastic book Mirage Men is one of the few sane works about UFO mythology.  Mark is one of the major influences on Saucer Country.

Shucks! I’ll hope to have a cameo appearance in a future issue!

The Abuses of Enchantment

Here’s a video of a presentation I gave for Dr David Luke’s ‘Ecology, Cosmos and Consciousness’ lecture series at London’s October Gallery in February 2011. The talk incorporates and expands upon some of the ideas outlined in Mirage Men.

In this audio-visual presentation Mark shows how military and intelligence operators have shaped and exploited beliefs in UFOs, ghosts, monsters, vampires, and elements from folklore and conspiracy theory to create an armoury of supernatural weapons of mass deception capable of manipulating consciousness on a grand scale. The inspiration for these toys, tools and techniques has come from a range of sources including fiction, cinema, stage magic, advertising and occultism and has, for many of its intended and unintended targets, altered their very perception and understanding of the world around us.

David is putting together an anthology based around this long-running series, to be published in the near future by my own Strange Attractor Press.