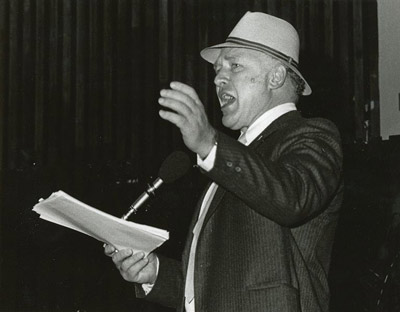 Ken Kesey, acid test prankster and author of One Flew Over the Cuckoo’s Nest, had some pretty strange neighbours while living in Bray’s Point, Oregon during his post-Pranksters comedown in the late ’60s. He believed them to be an “alien gang” of extraterrestrial expats.

Kesey, who had something of a lifelong fascination with UFOs, believed that these visitors were responsible for the strange lights he would see regularly over the ocean, and described:

gangs or groups of “seven to 9, maybe 11 of these beings” living in non-descript coastal homes with no TV antenna on the roof or signs of electrics, and “yet there’s a dim light.”

He noted one group huddled on a sofa that did not speak. Kesey told of knocking on the door of one home and talked to one person who was “sort of gray and distant.” He said the encounter with the person “didn’t involve drugs,” and that ideas were shared.

Kesey described the neighbors as having hawk like features that “are both arresting and elegant.” He said they all seemed to be the same age (60something) with a mix of men and woman that were both dark and white. Kesey also described their house as clean, but also drab and ordinary as its occupants.

Kesey and prankster friend Ken Babbs’ published their ideas about ETs and other new age concepts in their zine Spit in the Ocean, including articles about UFO contactees George Adamski, Wilhelm Reich and ancient Egyptian culture.

Author of 'Mirage Men' & 'Far Out' and publisher/editor at Strange Attractor Press.
View all posts by Mark →
This entry was posted in Culture, History. Bookmark the permalink.