Of storks, spies and paperclips 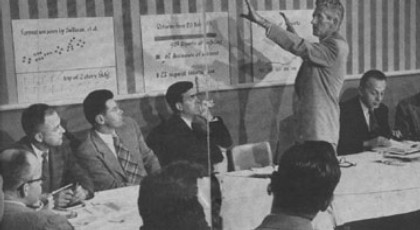 The document below can be found amongst the CIA’s online declassified file collection. Appearing just a couple of weeks after the CIA’s secret Robertson Panel encouraged the Agency to take a keener interest in the phenomenon, it’s a fascinating time capsule of this critical moment in UFO history.

The person under discussion is Dr Walter Riedel (far right, seated). During World War II, Riedel was chief designer on the V2 rocket, working under Wernher von Braun at the Peenemünde plant on Germany’s northeast coast. Like von Braun, Riedel was treated with suspicion by the Gestapo during the war, and was afterwards taken to the UK, before being ‘paperclipped’ to California and joining the North American Aviation Corporation in 1946. Here he worked on guided missiles for the company, whose rockets would ultimately find their way into the Apollo Command Module and the Saturn V rocket.

Riedel appears to have been a committed believer in extraterrestrial visitation and was a prominent member of the Californian Committee for Saucer Investigation, based in Los Angeles. Riedel is quoted in the infamous Life Magazine UFO article of April 1952 as saying “I am completely convinced that they [flying saucers] have an out-of-world basis”.

A couple of months later France Soir and other European newspapers would be running stories about Soviet flying saucers based on German WWII designs, so it’s curious that Riedel, who might conceivably have known something about alleged Nazi flying disc projects, such as Schriever’s Flugkreisel, was such a keen proponent of the extraterrestrial hypothesis. (von Braun, on the other hand, is said to have believed that tales of ET visitation were a propaganda tool, and that the US government would one day stage a fake alien landing to cement popular belief in alien reality).

According to the document, Riedel told the CIA operative that CSI planned to stage a ‘hoax’ saucer sighting over the Los Angeles area to test peoples’ observational abilities. It’s unclear if the hoax was carried out – the author suggests that it may have prompted a late January sighting over Malibu. Perhaps this one, listed at NICAP:

I wonder whether CSI’s hoax was connected to Project Stork, mentioned in a memo from the Battelle Memorial Institute’s Howard Cross to the Air Technical Intelligence Centre’s Miles Goss and Edward Ruppelt, who headed the USAF’s public UFO investigation, Project Blue Book. In the memo Cross suggests staging UFO incidents across the country to assess both military and civilian responses to unidentified aircraft. ‘Many different types of aerial activity should be secretly and purposefully scheduled within the area’, writes Cross, ‘. . . it can be assumed that there would be a steady flow of reports from ordinary civilian observers, in addition to those by military or other official  observers.’ The author doesn’t mention Stork, perhaps because he didn’t know about it or perhaps, as seems to be the case, the Air Force hadn’t told the CIA about it. How many other sightings of the time were delivered by Stork?

The CIA contact officer also expresses interest in a talk entitled ‘Rockets Behind the Iron Curtain’, given by George Sutton, another rocket engineer associated with CSI – even curiosity in what one’s Soviet counterparts were doing was enough to flag you up to the Agency. The document ends on a wry note: that the National Aeronautic Association has attempted to dissuade Riedel, ‘politely and indirectly’, to ease off the Flying Saucers. For more on Stork, the CIA and flying saucers, see Mirage Men and my upcoming article in Fortean Times #265, out on 22 July 2010.

Author of 'Mirage Men' & 'Far Out' and publisher/editor at Strange Attractor Press.
View all posts by Mark →
This entry was posted in Mirage Men Book, Technology, UFO. Bookmark the permalink.

5 Responses to Of storks, spies and paperclips